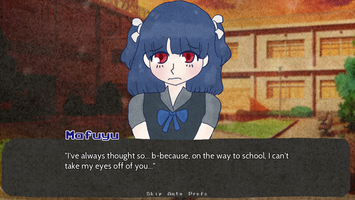 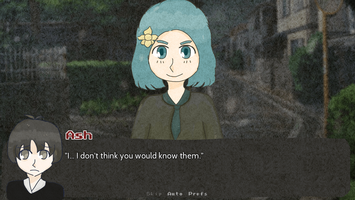 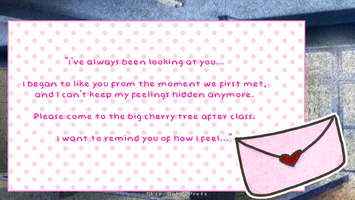 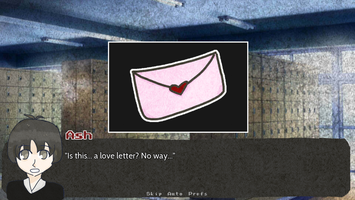 Last time I wrote a postmortem, It was… well, bittersweet.

This time, I’m happy to say that the doom and gloom that followed the development of the last game I uploaded on itch.io was (thankfully) not present in MyGF. In fact, I’d even say this devlog (and the whole experience) is a bit sappy!

I’d like to talk about why that’s the case.

Let’s start with the fact that MyGF is very short. You can probably finish it all in an hour or two, and it’s fairly linear.

There are only only three main characters characters (three different speaking styles, three points of view, three bullet lists of characteristics, pasts, and personalities to keep track of), and this time, I decided to draw most of the assets myself. 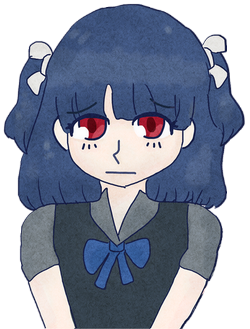 Fun fact: The GF (Mafuyu) has over 20 unique expressions, while the friend (Rikka) only has 6!

I’m not a super great artist. If you look closely, you can see the things I struggled on (like the fact that no one has hands…). I wanted to do something different that would catch the eye of new players, so I stuck to a cute textured style.

It was important to me that the characters were expressive, and even in the less wholesome moments, still cute.

I did the game’s logo and menu by hand as well. I was planning on making the game’s font with my own handwriting, but… it wasn’t very readable (lol), so I gave up on that. Maybe someday.

As for the writing of the actual script, I had a blast doing it from start to finish. Ren’py has such an easy way to see the logic behind the choices and the dialogue that it took me no time at all to finalize it.

I had a clear idea in my mind: a short story about a girl and her unconventional lover. That was it, and I tried my best to achieve it. I adored writing for the game, and I hope you come to love the story and the characters too! 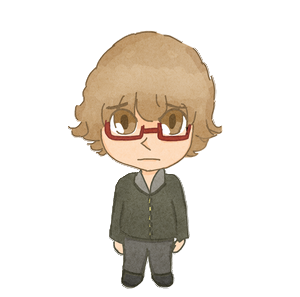 This one’s probably my favorite, because he was based on a character from one of my (not yet posted) short stories.

As for the coding… I’ve been working on a certain other looong project on Ren’py for the past year. Compared to that one, MyGF was super easy to prepare. I knew how to make the game do what I wanted it to, and I had the means to do so.

…And to top it all off, I didn’t name this project something food-related. Live and learn. 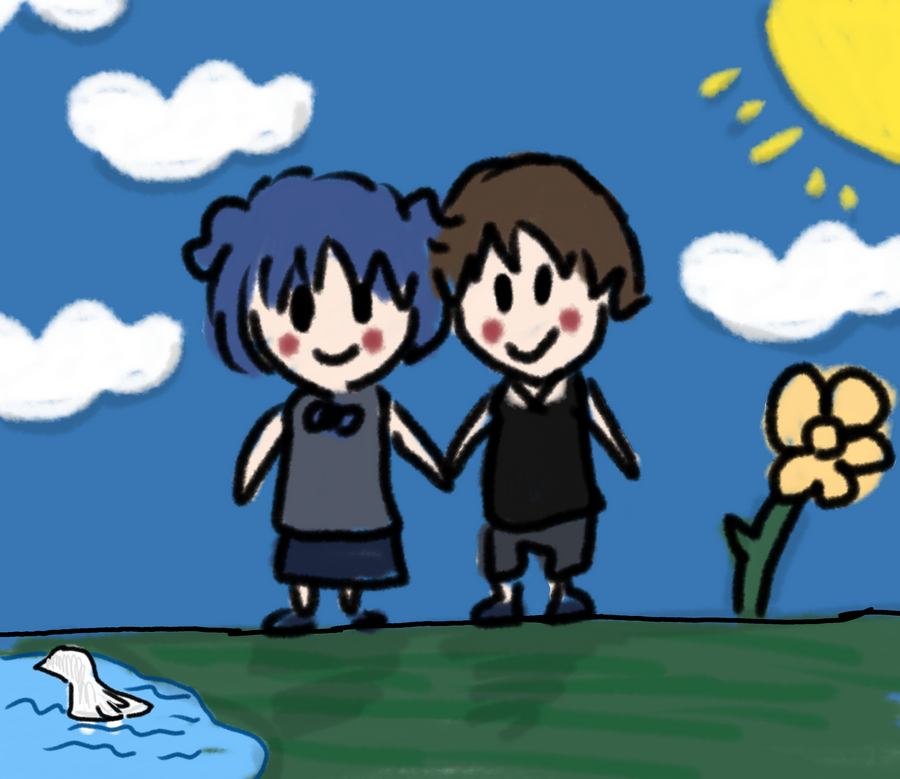 That’s not to say that everything was sunshine and roses, though.

Game development is a rollercoaster.

You start with an idea you’re excited about, you begin to plan it out, and when time comes to start actually producing it… the flaws and the holes appear, things fall apart, and aspects you were looking forward to showing off have to be scrapped.

I wanted the game to have several portrait options for the player to select. The original concept art for the player had them being long-haired - the idea was that I would change the hair length, skin color and other features to make varied portraits.

But I couldn’t make it look good. I had a lot of trouble implementing it, and spent way too much time trying to make it happen. In hindsight, it seems obvious that it wasn’t worth it, but when you’re in the midst of it, it’s easy to get carried away. In the end, all the variations went unused, and only the ‘short haired’ protagonist remained. 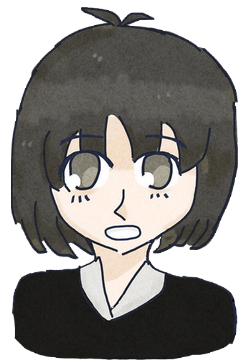 I spent a lot of time making assets for a feature that was too ambitious to implement by myself. That’s a mistake I won’t repeat in the future. As cute as the long-haired protag looks…

For coding-related woes, there’s the infamous ‘Reset’ button. Something went terribly wrong the first few times I tried to implement it, and late at night, in my sleepiness, I accidently made it so the ‘load’ button would function as the ‘reset’ button. I was so sleepy that I thought I managed to break Ren’Py itself!

Of course, the next day I quickly fixed the problem. Lesson learned: no coding when sleepy.

And also, let’s not forget the struggle that it was to test the mobile version. Everytime I wanted to test how it would look on an actual device, I had to redownload and reinstall the game, over and over. I think I ended up redownloading the apk file over a dozen times… until I found out that I could’ve just connected my device to the PC. Doh! 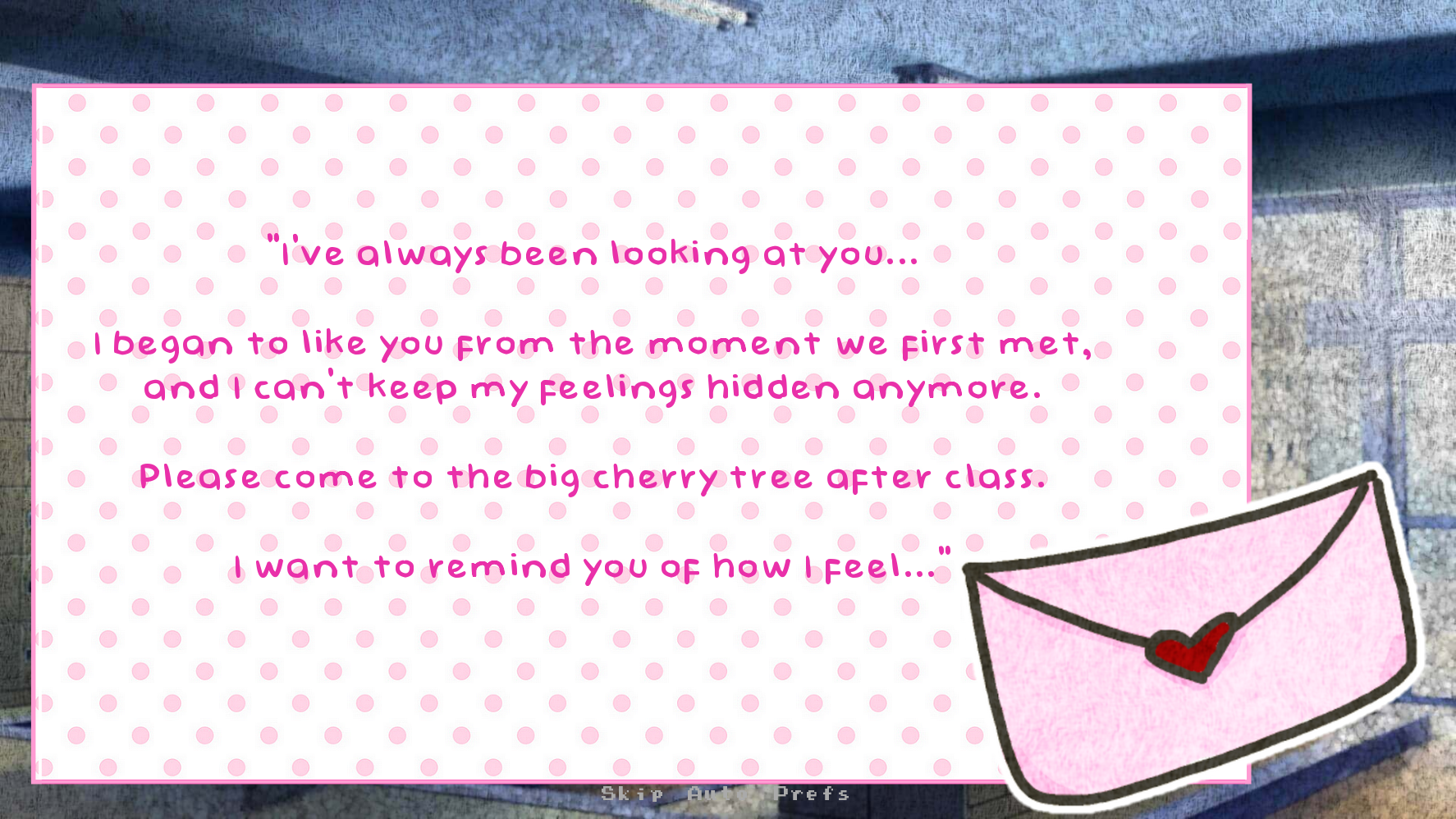 Still, I’m very happy with how MyGF turned out. It was engaging to create, it was a learning experience, and, most importantly - it was fun.

Drawing, writing, coding, even looking for answers to stupid questions… instead of something I dreaded to do, I looked forward to it. It was a rewarding experience, and I want to share it with you all - especially those who have supported my past projects.

Everyone who downloaded my games, left kind comments on my pages, both publicly and privately, and made my day with their heartfelt messages - I wouldn’t be publishing MyGF today, nor would I want to keep making games, if it wasn’t for you. Thank you.

I hope that you enjoy playing it, and continue supporting my projects in the future!

Thank you for reading!